Bangalore Metropolitan Transport Corporation (BMTC) has recently launched its Intelligent Transportation System (ITS) in May’16. First announced in 2013, this was one of the systems most data enthusiasts in urban transport were eagerly waiting for. The system was designed to scale on paper and BMTC made sure the data rights of data being generated are with them instead of the contractor. Even with extreme planning, the system was delayed by 2 years and has several issues with it. Some of these issues have been highlighted to BMTC by members of datameet’s transport working group with suggestions to make it better in early June.  Along with the suggestions we had several questions regarding the project, we have asked BMTC to help us understand the ITS system in a better way and expressed interest to be part of the Evaluation & Monitoring (E&M) of the ITS project.  It is important that the project is closely monitored to improve public transportation for Bengaluru.

We also shared some of the previous work carried out by members of the group and suggestions to use open transport standards like GTFS, usage of openstreetmap data to reduce maintenance costs for currently using third party services like Google Maps which is not entirely free.

Members of datameet have been working on transport data of BMTC since 2010. Thejesh GN hosts static data of routes and schedules  of various years through his project OpenBangalore.  As a community of researchers, data users and enthusiasts we have been studying and experimenting with the evolution of data practices in India. Open Data is helping us be aware of our surroundings and also contribute back to the city in our own way. BMTC’s ITS implementation is a opportunity for most of us, we can potentially use GPS data to understand traffic patterns, rash driving of bus drivers, skipping of bus stops and trips. The ITS system will help the commuters more than ever if being utilized the right way. Open Data can help make this dream a reality by letting any commuter analyze his ride. Officials of BMTC has made announcements of bringing up a data sharing policy on the lines of National Data Sharing and Accessibility Policy (NDSAP). In this regard we requested them to host a public consultation for their draft data sharing policy. We hope we can help BMTC and Bengaluru in a better way by bringing a policy suitable for all commuters and not just data users.

Open Bangalore has been a pioneer in opening up several data sets that help understand Bangalore city. This includes the network of Bangalore Metropolitan Transport Corporation (BMTC). The BMTC operates over 2000 routes in the city and region of Bangalore and is the only real mode of public transit system in the city. Some of us at DataMeet took to time understand its network better by performing some basic analysis on the gathered dataset. The data set had bus stops, routes and trips. We inspected frequency, coverage, redundancy and reachability.

BMTC is known for its many long routes. Route 600 is the longest, making a roundtrip around the city, covering 117 km in about 5 hours. There are 5 trips a day, and these buses are packed throughout. It should be noted that while the route traces the edges of the city in the west and north, it encircles the larger industrial clusters of the east and south. 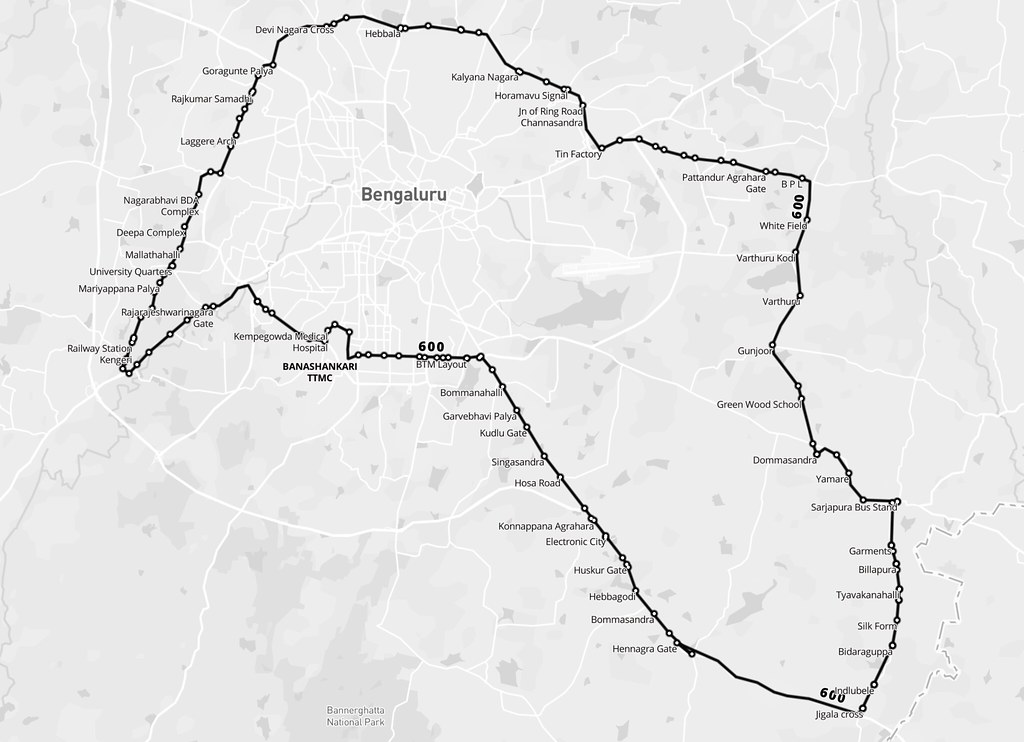 Next, I wanted to look at the frequency of different routes. In the image below, stroke thickness indicates how many trips each route makes. The relationship of the bus terminals with neighbourhoods and the road network can be easily observed. For instance, the north and west of the city have fewer, but more frequent routes. Whereas, the south has more routes with less frequency. Also, nodes in the north and west seem to rely more on the trunk roads than the diversely-connected nodes in the south. One can easily trace the Outer Ring Road, too. 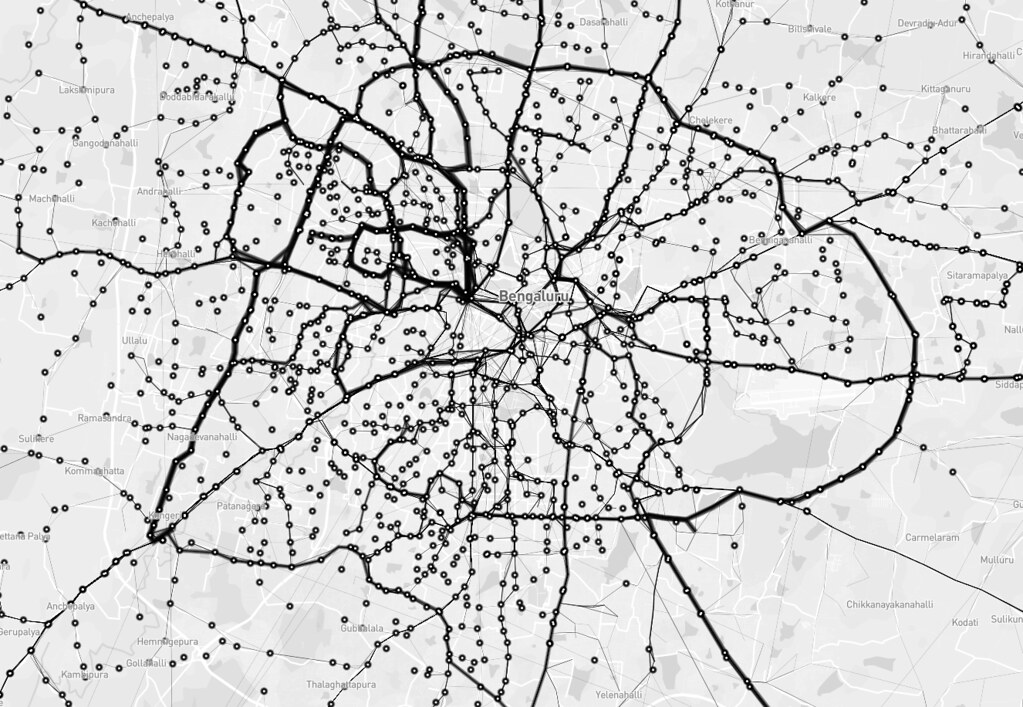 I tried to define reachability as destinations one can get to from a stop without transferring to another bus. The BMTC network operates long and direct routes. The map shows straight lines between bus stops that are connected by a single route. The furthest you can get is from Krishnarajendra Market (KR Market) to the eastward town of Biskuru: roughly 49 km as the crow flies.

Which directions does BMTC run? It is interesting that BMTC covers the city North – South (blue) and East – West (brown) with almost equal distribution. 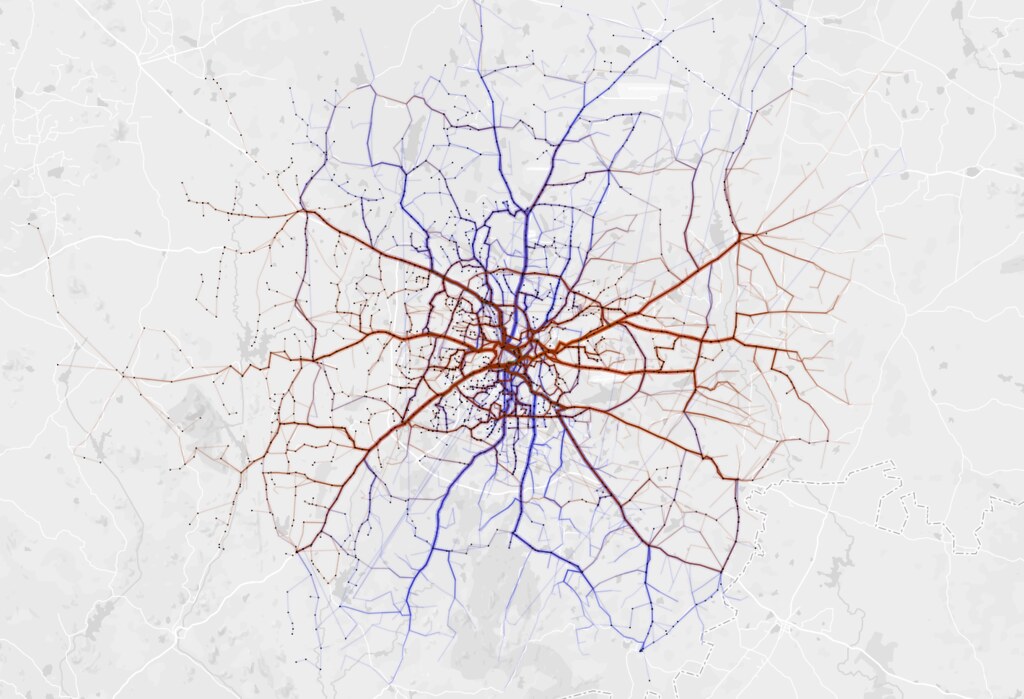 BMTC routes are classified into different series. Starting from 1 – 9 and A – W. I analysed coverage based on series 2 (blue) and 3 (green) and they make up almost 76% of the entire network. 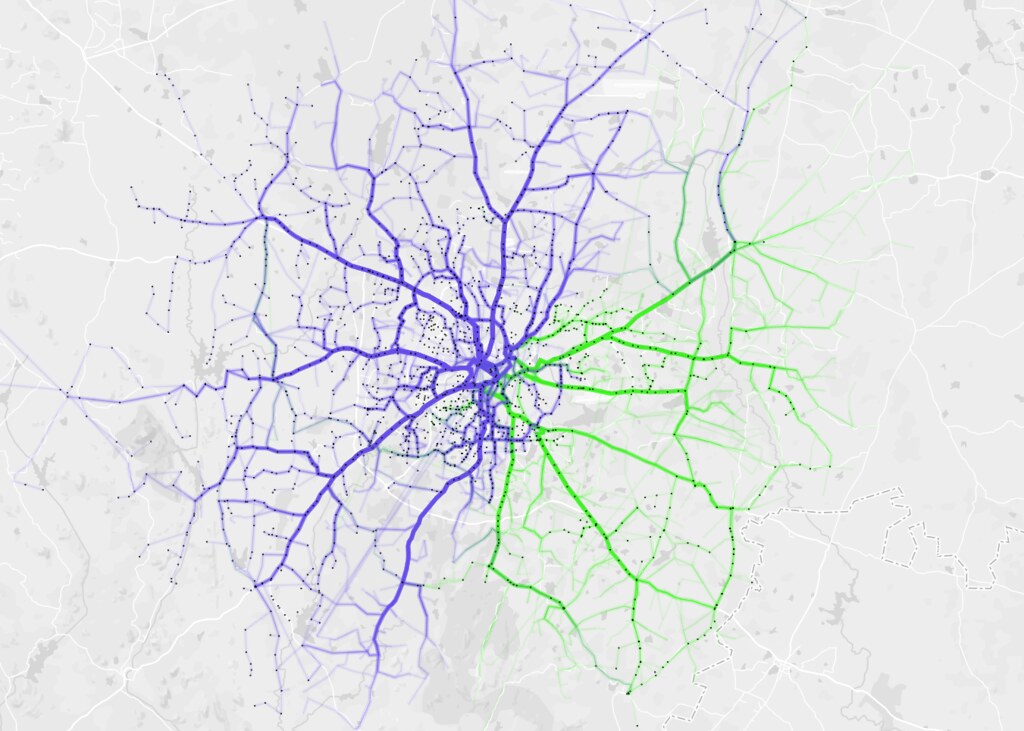 Tejas and I took turns to try and figure out the redundancy within the network. Redundancy is good to absorb an over spill of bus commuters. Redundancy is a drain on resources and makes it hard to manage such a vast network with efficiency. So, we looked at segments that overlapped different bus routes.

This map by Aruna shows node strength – number of routes passing through a particular stop. You can see that the strength decreases as we move away from the city center with the exception of depots.

Just like the data, our code and approach are open on Github. We would love to hear from you, and have conversations about the visualization, the BMTC, and everything in between!